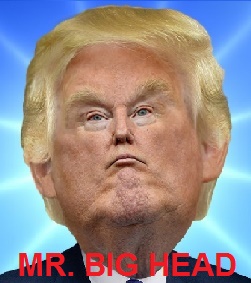 As a result of this failure he decided to challenge Fox news  to a television ratings battle by holding a competing event a few miles from the debate with his own little party which would benefit the veterans charities and of course make his own charity look stellar. He did raise around $6 million dollars from some of his wealthy friends and he dipped into his own wealth with a one million dollar donation to his own charity (tax deductible). People were lined up for blocks to enter the event and some were turned back but it was held in a place that wasn't big enough so as to not have any empty seats.
So who won the ratings battle. It looks like Fox News blew Trump out of the water on this point. The Fox preliminary ratings came out at 12.5 million viewers compared to the Trump event drawing a miserly 2.7 million viewers. The 12 million viewers was a far cry from the 24 million that Fox drew for the first debate where Trump was rattled by Megyn Kelly but if you add the Trump viewers to this debate it would most likely have come in at 14 mil. However you look at it, the debate came out the big winner over Trump's event at Drake University. Both CNN and MSNBC carried portions of the Trump event and it was fully covered by OAN (One America News) and their combined rating was 2.7 million viewers.
The Trump Campaign had predicted that the debate on Fox would garner in the neighborhood of 1 to 2 million viewers. It looks like they were off by 10 million viewers. The previous debate on Fox Business network only saw a viewership of 11 million and Trump was a participant in that one.Fox can still claim that this debate was the second highest rated telecast in the network's twenty year history. Even the under card debate beat Trump's event numbers. I would assume that Trump blew it on two fronts on his shrewd calculation and no telling whether this will hurt or help him with Iowan voters on Monday. As it turned out Trump was the big loser but it is a given that he'll put his famous Trump spin on it and will lie about this debacle like he lies about everything else.
Posted by Israel Torres-- Author, Artist, Former Realtor at 5:49 PM