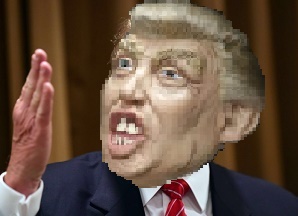 What's the big deal with Trump. Is he still trying to get the news media coverage that he gets for free or is he serious about his accusations about Cruz stealing the Iowa  caucus. If he came in second, what's the big deal. The last two winners in Iowa, Santorum and Huckabee have already dropped out of this race and most likely would welcome a VP nod if Trump wins the nomination. Trump just cannot take coming in second and no matter what happens he will go to his grave believing that he would be declared the winner had Cruz not cheated.
The whole controversy that Trump brings up is that the Cruz's campaign apparently sent out flyers, email, and tweets stating that Carson was dropping out of the race and that Carson caucus voters should vote for Cruz instead. Underhanded maybe, but that sounds like something Trump would do to win. As things are Carson is still in the race and there has been a Cruz apology with Carson accepting it and it could have been a conspiracy between two candidates to derail the Trump avalanche. The truth is that Trump miscalculated his skipping the last GOP debate in Iowa and should just man up and accept the fact that he came in number 2. Is he going to be whining all through this campaign if he doesn't come in on top in every nominating election from here forward.
The competitive nature of Donald Trump is beyond normal because Iowa hasn't picked a winner in the last sixteen years. His whining about winning may be justified because he has lost his invincibility and he can be defeated. If he can have a lead in the polls all through the process and when it comes to getting in that booth and pulling that lever which is still done in some places here in America, the people of Iowa are not voting for the 'Donald'. Although the Iowa causus' are different and are like town hall meetings and almost everybody votes electronically now it is still a secret ballot and people will make up their mind at the last minute. At an Iowa GOP caucus a candidate can walk  in and give a speech before the paper ballot is filled in. People can also walk-in and register to vote and there are speeches for support of candidates and can even include the candidates that are running. The events take place in 1,744 precincts across the state -- including churches, libraries and other smaller venues, starting at about 7 p.m. local time.
The Democratic caucus process is totally different. At a Democratic caucus site, upon arrival participants essentially divide into groups depending on their preferred candidate. The Groups that don’t have enough members to make their candidate “viable” are disbanded. After disbanding the members then join another candidate group, at the persuasion of others, until groups have sufficient members to make a candidate viable enough to get delegates. The candidates who finish on top often continue with their campaigns deep into the election cycle while those who finish at or near the bottom sometimes drop out soon thereafter, although that’s not always the case.
As a narcissist Trump has a rigid type of thinking, a "Swiss Cheese Brain" with holes in the brain and mind where good common sense and conscience should be. Not a good thing when your looking at him being POTUS. That's the behavior of a narcissistic personality
Narcissists develop a false self and use aggression and intimidation to get their way. Narcissistic attitudes and behavior come from the ego defenses that function as smoke screens to hide the deep shame and fractures that came from being hurt emotionally or physically as a child. Self image is distorted with the narcissistic point of view and the person believes that he is superior to others. An inflated self-esteem is a defense to cover up their sense of shame deep within. Grandiosity is an insidious error in thinking that prevents them from blaming themselves and becoming depressed or disintegrated. Creeping narcissism in a person is their succumbing to the gradual demands of selfishness and entitlement by giving in to "I am special" beliefs.
.
Traits of a narcissistic Personality:
1. They're likable -- at least, at first glance.
2. Not all narcissists are loud and proud. In fact, some are quiet and shy.
3. They can often be found in leadership roles.
4. They always manage to make the conversation about themselves.
5. They're also guilty of name-dropping.
6. Not every story a narcissist tells is one of victory. But even in the stories of tragedy or failure, there's an air of entitlement and victimization.
7. They like nice things.
8. Appearance is everything to them.
9. On Facebook or twitter, they have lots of friends -- and not a single bad picture.
10. They are strongly averse to criticism.
11. Excuses are a narcissist's best friend.
12. They leave a trail of wreckage behind them.
13. And in that vein, they may be more likely to cheat.
14. Everything is personal.
15. A narcissistic person probably has no idea he or she is a narcissist.
16. You find yourself resorting to flattery just to maintain the peace with a narcissist.
17. Narcissists are not low in self-esteem.
18. Men are more likely to be narcissists than women.
Trump always manages to make the conversation about himself. Personality flaw or childhood trauma?
Posted by Israel Torres-- Author, Artist, Former Realtor at 10:38 AM